We’ve had a wonderful time celebrating Aboriginal and Torres Strait Islander culture and community at NAIDOC Week events this week. 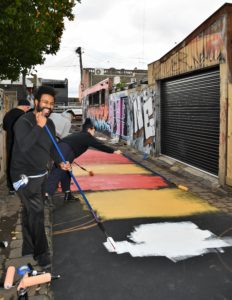 On Tuesday, our LiveWires program took part in the NAIDOC celebrations at Collingwood Public Housing Estate with other residents and members of the community. Activities included painting artwork and murals, boomerang painting, musical performances, and plenty of free food.

The highlight of the day was painting a huge Aboriginal artwork on the road surface of the nearby Tavares Lane.

The laneway was recently named after Antonio Tavares, who passed away in 2017. Antonio was born in Cape Verde, a small island nation off the west coast of Africa. He initially migrated to Europe, where he became a European Welterweight Boxing Champion, and then he later moved to Australia in 1983, eventually settling in the Collingwood Public Housing Estate.

Antonio was a deeply loved long-term resident of the Housing Estate who worked tirelessly to contribute to his community and support young people. In 2008 he set up the Collingwood Housing Estate Residents Gym, which he funded himself.

Antonio’s son, Joshua, said the impact that his father had on the Housing Estate community was profound. “People still ask about him,” Joshua said. “And if they haven’t heard, when I say he’s passed away, they weep. People still reminisce about what a pillar of the community he was.”

Joshua said the naming of the lane was very significant because, as far as he is aware, Tavares Lane is:

“We felt being the first non-white name in the area that we’d pay respects to our First Nations people, and organise the painting to happen in NAIDOC Week.”

Joshua works at the Collingwood Neighbourhood House, which has a partnership with Concern Australia and the Livewires program. “We have a strong partnership, and today’s NAIDOC Week event is a display of our joint efforts to invest in the children of this community,” Joshua said.

Children from the LiveWires program show off their face painting.

On Wednesday, the LiveWires children went along to the NAIDOC Family Day at Collingwood Children’s Farm, now in its 20th year for Aboriginal Housing Victoria. Despite the windy weather, everyone had a great time with Indigenous Hip Hop dancing, face painting, jumping castle, boomerang painting, damper making, jewelry making, a weaving workshop and much more.

LiveWires celebrates the rich and diverse cultural heritage of many of the children by taking part in a range of cultural activities throughout the year. About 6% of LiveWires participants come from Aboriginal and Torres Strait Islander background and 77% come from culturally and linguistically diverse backgrounds, with most coming from African countries (38%) including South Sudanese, Ethiopian, Eritrean, and Oromo.

Celebrating Aboriginal and Torres Strait Islander culture is important for us to share the history and culture of our First Nations people, to create greater understanding and respect in our communities, and to work together towards reconciliation.

Our founder, Rev Dr John Smith, was a powerful voice for justice for First Nations people, and we stand in that tradition.

We’re committed to the journey of reconciliation, and we’re proud to announce that we’ve just started the process of creating our first official Reconciliation Action Plan to give greater structure and direction to the values that we have always held and embodied.

Our journey to develop a Reconciliation Action Plan will formalise our commitment to reconciliation through three key areas of action: