Walk in My Shoes Launch – What a fantastic turnout. Thanks for coming! 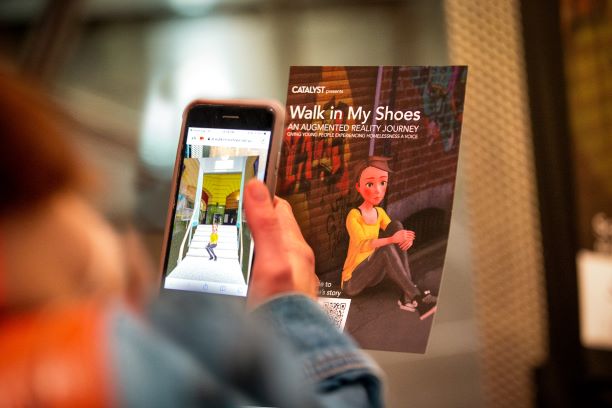 An innovative way to learn about youth homelessness – an augmented reality experience.

View Stevie’s story on your phone now. Click to go through to the Steps Outreach Service page.

This week saw the successful launch of Walk in My Shoes, an innovative exhibition Steps Outreach Service (Steps) co-hosted with Igniting Change and Catalyst to raise awareness about youth homelessness. Held at The Atrium at Federation Square in the heart of Melbourne, we had a great turnout and the launch emerged as a powerful opportunity to hear from young people who took to the stage to share their experience with the public.

CEO of Concern Australia Michelle Crawford highlighted that the evening was a chance to learn more about the issue of youth homelessness through a creative use of technology through their phones, hear directly from young people who have walked that path and congratulate the tireless work of the Steps’ team’s Anne Mitchell and Grace Baulch who have been supporting youth in this space for a combined period of 34 years.

Program Manager Anne Mitchell was welcomed on to the stage and shared how encouraged she was by supporters wanting to make a difference for young people experiencing homelessness. Young people are being left behind in the economic recovery from COVID. Anne shared that now is the time to learn more about what we can all do to make a difference.

Edward Ring from Igniting Change was the MC for the remainder of the evening, providing a great overview of the critical work the Steps team have been doing for decades in the space. He congratulated Anne for her ongoing and committed support of young people experiencing homelessness.

It was powerful hearing Julian, a young man supported by the Steps team, speak about his experience at 18 years of age which was incredibly moving. Ending up on the street at such a young age, Julian faced the ugly truth of what this meant. Hungry, scared and alone. It was remarkable to hear his story and the challenges that came with experiencing homelessness.

“Living on the street was so tough. I remember for the first two weeks I didn’t eat anything and survived off drinking water from the taps in people’s front yards.”

“Whenever I saw Anne, I never felt like I was just another client and she was my worker, she really felt like a person who cared and she’s been looking out for me for a long time now which has made a big difference in my life and I’m so grateful.” 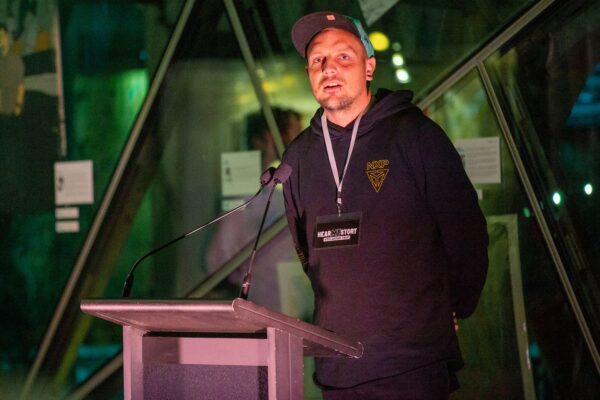 Julian sharing his story was powerful and moving

Julian’s experience spoke to the ongoing relational support that the Steps team provides over time which he said was critical to his ability to getting back on his feet and begin to build a fulfilling life.

Feedback from the exhibition was fantastic. Hearing Tash up on stage sing an original song was just beautiful. So talented!

It was wonderful to see everyone plug their headphones in and follow Stevie, the star of the Augmented Reality element of the exhibition, guiding viewers through her experience of being young and homeless. 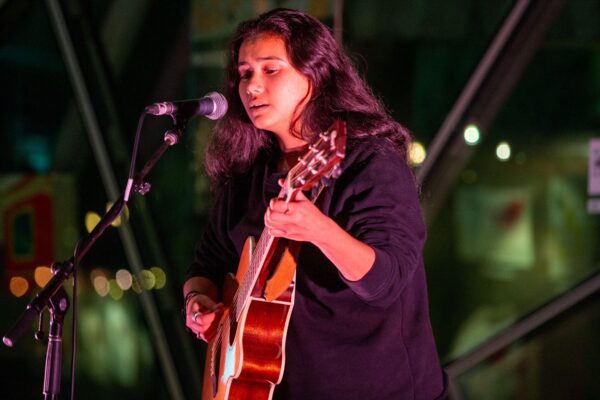 Tash performing an original at Walk in My Shoes launch

Anne Mitchell said feedback from the exhibition has been brilliant and really valuable and said,

“It was wonderful to see so many supporters and young people present, all wanting to make a difference for young people experiencing homelessness.

Being able to watch a young person’s story of homelessness through Augmented Reality created empathy and understanding in the audience.

The members of the Steps Advisory Group, who all have a lived experience of homeless, felt empowered and affirmed by being given the chance to tell their story to people who wanted to hear it.” 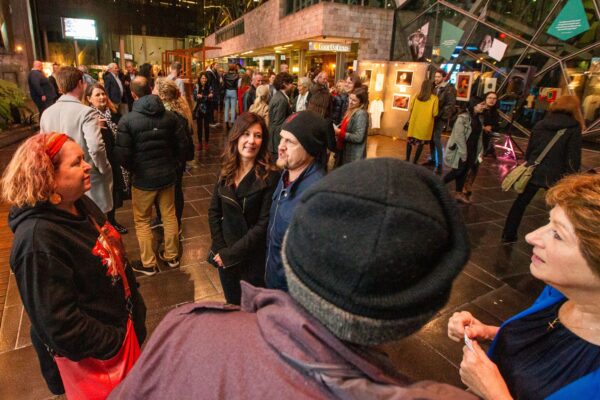 Walk in My Shoes Exhibition at The Atrium Fed Square

Dalton Sanderson of Parade College Bundoora won first prize in the photographic competition with his entry “Washed Away”, below, visually representing how a young person’s childhood can be ‘washed away’ when their family is experiencing disadvantage and  financial hardship. It was great to hear him speak about what it meant to win the competition and we think you’ll agree his image was simple yet powerful. 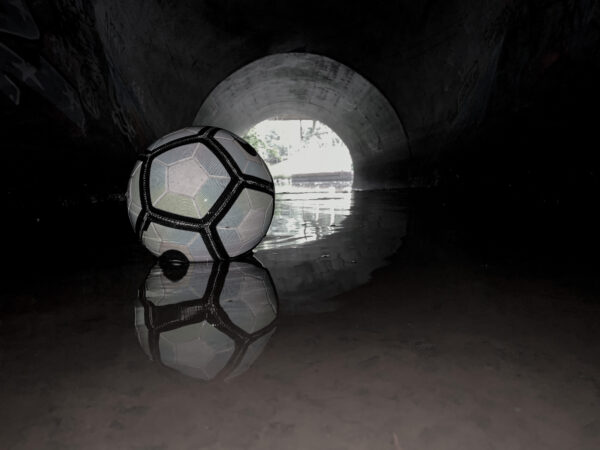 The winner of the Design a T-shirt for Homelessness competition was Laticia Nguyen from Catholic Regional College St Albans with her entry “A Cup of Cats”.

How you can make a difference

Donate to support the work of Steps Outreach Service.

You can also take action and get involved in other ways:

Support the Raise the Rate campaign.

Participate in the National Youth Commission’s Conference raising awareness around Youth Homelessness coming up this June.