Every July for the past eight years, Grace Baulch has braved a cold winter’s morning to be a part of the annual Run Melbourne fundraising event. 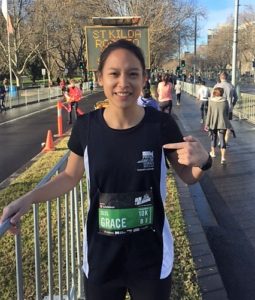 “Even though Run Melbourne is held in the middle of winter, it is a small inconvenience when compared to the many people who sleep on the streets of our city in freezing conditions,” said Grace. “It is this thought and my belief in how Steps makes a difference in the lives of young people experiencing homelessness that will keep me running on Sunday 28th July.”

As a Youth Worker with our Steps Outreach Service for more than nine years, Grace knows firsthand the importance of fundraising events such as Run Melbourne.

“We don’t receive any Government funding, so Steps must raise its own funds to support our work,” said Grace. “Every dollar we raise is crucial to making a difference for some of Melbourne’s most vulnerable young people.”

Last year, Steps raised over $20,000 and was in the top ten fundraising teams for Run Melbourne. This year we hope to do it again!

“These vital funds allow Steps workers and volunteers to continue to support the young people we meet in the CBD,” said Grace. “Many young people lose their official support workers when they turn 18 or 21, and some are only allocated short-term workers. Through Steps, we can offer long-term support to these young people.

“We provide continuity and stability in an often chaotic world of a young person who is homeless or at risk of becoming homeless.”

Grace said she is constantly moved by the experiences of the young people that she meets. 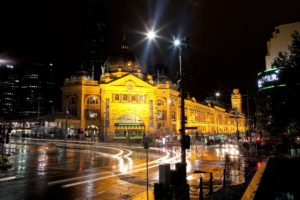 Melbourne winters are tough for young people who are homeless. Grace and the Steps team meet many of them in the heart of the city.

“It has been a privilege to walk alongside many young people and to celebrate with them as they take steps towards a more positive life and begin to have hope for their future,” said Grace. “I first met Sasha when she was 16 years old. Having experienced significant trauma as a child, she had difficulty with her mental health, spent her nights couch-surfing or sleeping rough and did not trust easily.

“We began supporting her more intensively, advocating for her and referring her to services such as housing and mental health. When Sasha turned 18, most of her workers were no longer able to support her, but her Steps workers were still there.

“Sasha is now 21 and living in stable housing. Living independently can still be challenging but we continue to support her through her ups and downs, reminding her that each day is a new day and that there is always hope for a brighter future.”

Grace said that her commitment to doing Run Melbourne for Steps has also helped her to make fitness a part of her daily routine. “I enjoy running three times a week along with gym classes and cycling,” she said.

Grace and the Concern Australia Run Melbourne team still need your help to reach their target of $20,000.

Donate now so Grace and the Steps team can continue to support homeless young people like Sasha.

We’re so grateful to everyone who has already donated generously to Grace and the Concern Australia team “Steps for Youth Homelessness”.